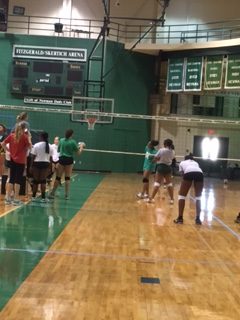 Traveling all the way to Thibodaux this Monday, the volleyball players started their week in solid fashion. Both JV teams played and ED White, losing both matches. However, the varsity girls defeated White, scoring a win in the fourth game. However, this defeat did not stop JV. Next, the JV White and Varsity teams played East St. John at home on Wednesday. Both teams never lost their enthusiasm, as the Varsity players won in only three games while the JV White team lost in three. Also on Wednesday, the JV Green team traveled to De La Salle High School. There, the girls beat the JV De La Salle team by over 15 points each game! The JV Green team is rolling after their great victory, and every Newman team is looking to use the momentum of the past two weeks moving forward.

Keep up the great work everybody!

The Navigator • Copyright 2021 • FLEX WordPress Theme by SNO • Log in