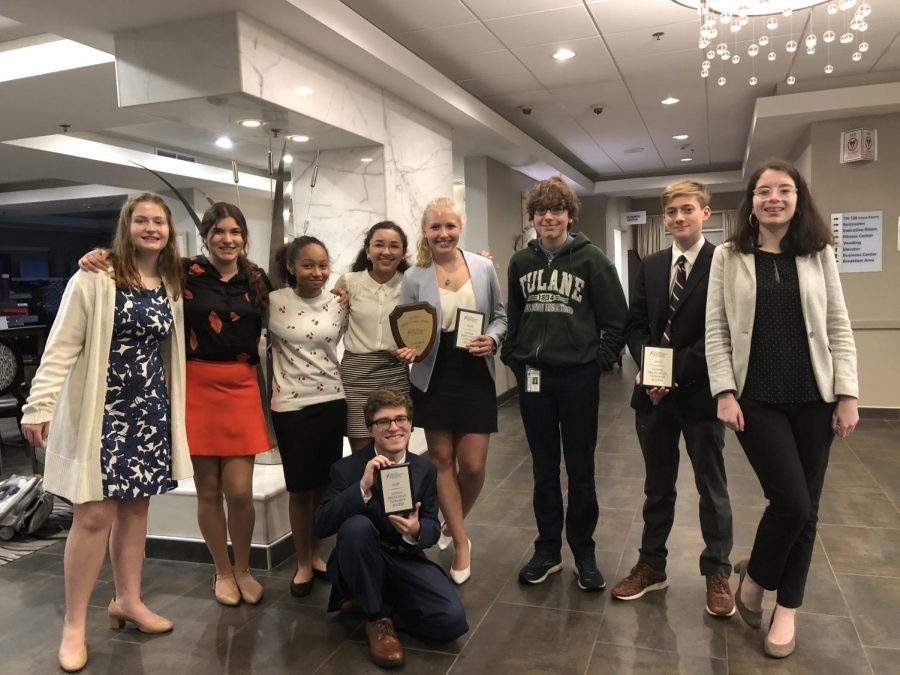 The Speech and Debate team at the Congressional National Qualifying Tournament

For the past month, the Speech and Debate team has been incredibly busy. The season started back with team members split between the Congressional national qualifying tournament and the University of Houston. At Congressional national qualifiers the team experienced significant success with Serena Klebba qualifying in the Senate, and Luke Estrada and David Adler qualifying in the House. Sophomore Giovanna Piedimonte is the first alternate in the House.
That same weekend the policy debate team of Andrew Herman and Griffin Descant traveled to Houston for the University of Houston debate tournament.

Last weekend the team had another strong week of competition. At Durham, junior David Adler advanced to the octofinal round of Lincoln Douglass Debate and senior Jackson Haber advanced to the double octofinal round of Lincoln Douglass. As a result of their outstanding performance both competitors were invited to compete in the Durham Challenge, a set of additional debates designed to bring the best competitors at the tournament together.
The remainder of the team traveled to Saint Thomas Moore high school in Lafayette. Serena Klebba came first in Senior Extemporaneous Speaking and second in Senior Impromptu Speaking. The two Policy teams of Elizabeth Elliot and Giovanna Piedimonte, and Carolina Fontanez and Amaia Ottely, were co-champions in Novice Policy Debate. Freshman Isabelle Plaisance made it to semi-finals in declamation, and sophomore Elly Patron made semi-finals in Senior Extemporaneous Speaking. Additionally, freshman Petyon Johnson made it to finals in Junior Extemporaneous Speaking.

Next weekend your Greenie debaters will travel to Atlanta for the prestigious Barkley Forum at Emory University.